We celebrated the State Fair with the kids of the Ronald McDonald House in Manhattan.  There was good food, good music and a lot fun.  This is a partnership we cherish and love to make sure the kids and families have a great time.  It was a rainy day outside but we fixed that by putting sunflowers everywhere!

As each of our guests entered the house, they were greeted by sunflowers.

It was a fun day of the little ones running around. The event theme was the “State Fair”. Our families enjoyed fried chicken and corn on the cob.

The kids had a great time having their picture taken as “cowboys”.

These events are important for the families at the house. They get to spend afternoon having fun.

What else do you enjoy at the fair? Dixieland Music and cotton candy.

The families really enjoyed the music. The kids danced and watched the band play.

As each of the families left that afternoon, they were given a bouquet of Sunflowers as a reminder of their fun day.

As with all of the events we do at the house, we have to say a big thank you to the Ronald McDonald House staff and their hard working volunteers.  They really know how to throw a great event and it’s always a pleasure to partner with them!

A beautiful wedding reception in May at one of our favorite venues in New York City, Gotham Hall.  To keep some interest in the decor, we use both tall and low arrangements.  The color palette was ivories, pinks and peaches.  We used a variety of roses, hydrangea and ranunculus with lambs ear in each of the arrangements. 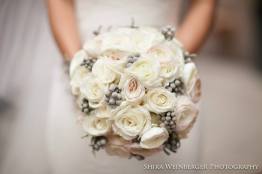 We love hearing from our clients!

Such a nice note from our 2013 bride, Gia Phares, she reached out to us on our Facebook page…

“I wanted to express my gratitude for the beautiful wedding bouquet you did for our elopement. I wandered in one day in May 2013. When I told you that I was getting married in a few days and was wishing for a few light pink peonies, you surprised me with a bouquet that was beyond gorgeous! It was my absolute favorite part of the day! Oceans and oceans of gratitude to you for your kindness and generosity for our little private event.”

Start telling your event “story” when your guests arrive through the front door.

An event by the numbers…

Each year, New York Presbyterian celebrates their annual Gala at the Waldorf Astoria Hotel in the Grand Ballroom. Here is there event in numbers…

40 yards of apple green bengaline fabric to cover the stage

And for the flower count… 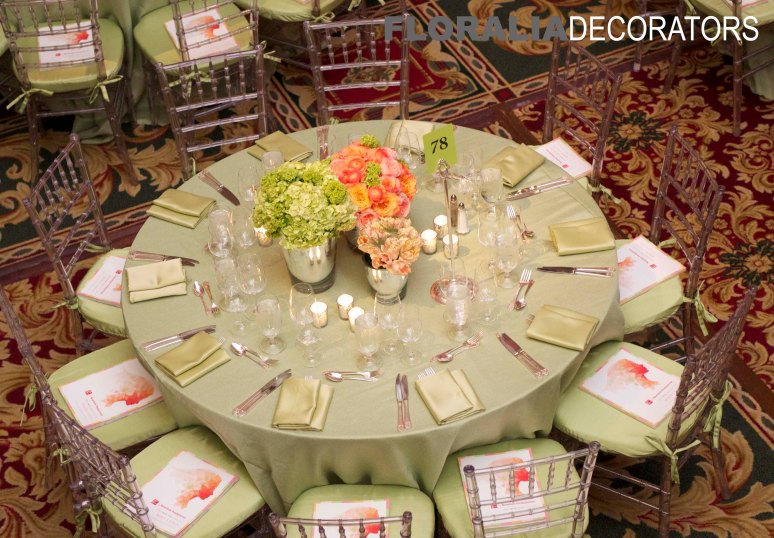 Elyse and Adam…a wedding at the Waldorf Astoria Hotel…

Our client’s beautiful wedding was featured in Grace Ormonde Magazine.  Elyse & Adam were married at the Waldorf Astoria Hotel on September 13, 2014.

Here is their story as told by Grace Ormonde Magazine…

Elyse Schimel and Adam Mues met through an online dating service in January of 2013. Their first date was dinner at an Italian restaurant in New York City followed by drinks and dancing at a nearby sports bar and club. Although the outline of the date was standard, they both felt a strong early connection with one another.

Adam began courting Elyse over the next several months with frequent dinners, movies, brunch, sporting event dates and whatever he could think of in order to spend time with her. Four months later they took a vacation to San Francisco and had many exciting adventures including the idea that they wanted to move in together when they returned to New York City. Adam quickly realized that she was a wonderful supportive person that he would be lucky to spend the rest of his life with.

After about a year of living together, Adam proposed to Elyse at his childhood home in Nebraska while the two were visiting for his high school class reunion. Although Elyse had been waiting for some time for this news, the proposal was a surprise to her and she was very excited to share the news with family and to introduce herself as Adam’s fiancé. 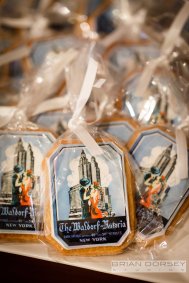 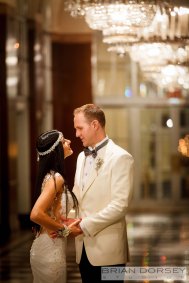 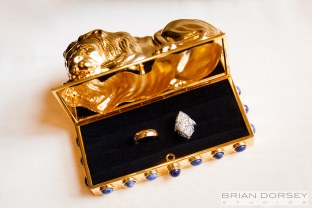 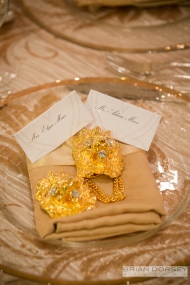 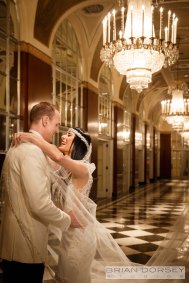 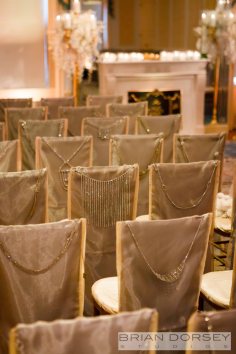 After a whirlwind engagement and planning period of 3 months, Elyse and Adam decided to have their wedding at the Waldorf Astoria Hotel in New York City. They chose the location for its classy Art Deco period style and elegance. Extended family and friends traveled to New York City for the event and for mini-vacations. The wedding had an Art Deco theme highlighting Elyse’s business (and her own personal style) that included unusual jewelry and stones used in the couple’s clothing, accessories, wedding cake, and in the ceremony itself. This included rhinestone embellishments to Elyse’s dress and Adam’s cuff links, tuxedo set and cummerbund were all custom made with rhinestones and other jewels from Elyse’s company.

Although everyone was trying to absorb all of the beauty, style and emotions surrounding the occasion, both Elyse and Adam admit that the event was difficult to remember in totality. The wedding day was filled with excitement and chaos, but everything went according to plan and was considered by everyone to be an enormous success.

You can see the rest of the beautiful photos here.

Now for the details….

Here is a private dinner we did at the Waldorf Astoria Hotel, we made a custom leather covered table, used beautiful chargers that complimented the textures and color choice of the floral.

So for a little inspiration for setting your own event table at home, keep the following tips in mind:  use interesting vessels for the florals and candle light,  don’t be afraid to use chargers and unique linens for your table.  All these little details combined make for a much larger impact.

Print a menu card for each guest at your table. It’s a nice accent and your guest’s have something to reference throughout the dinner. 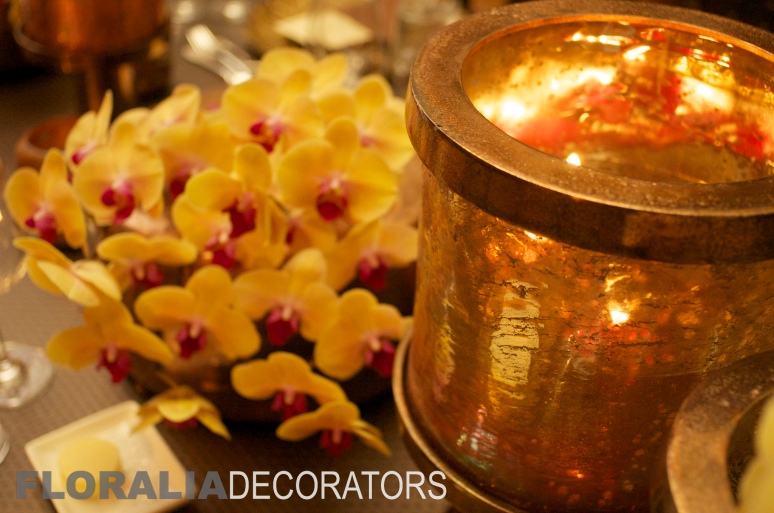 Candle light is always a nice addition to any dinner table. Choose unique containers that cast a warm light across your table to create a festive atmosphere. 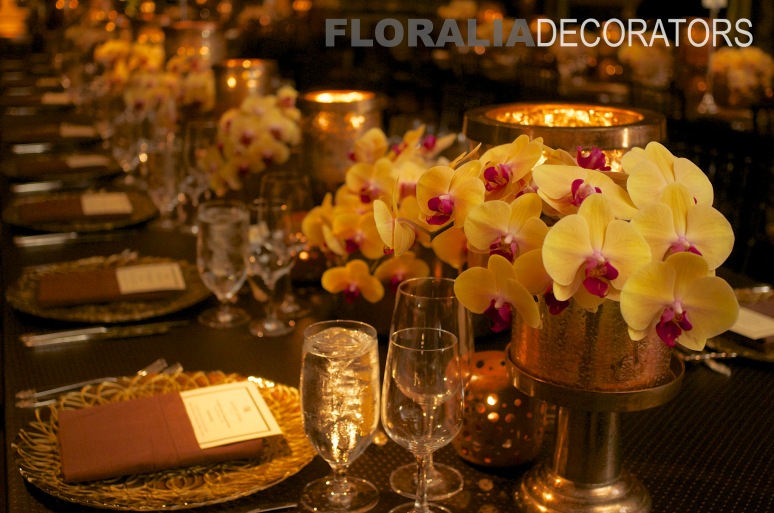 Make sure the details you lay out on your table compliment each other in color and in texture. 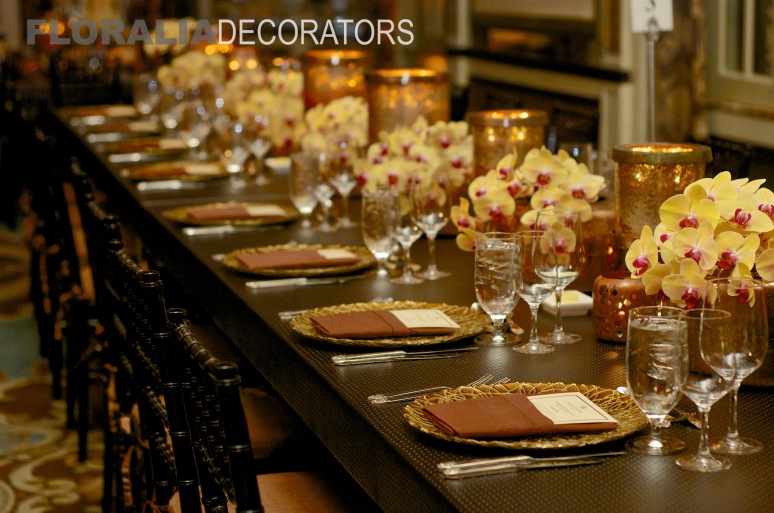 When setting your table, precision is also part of the decor. 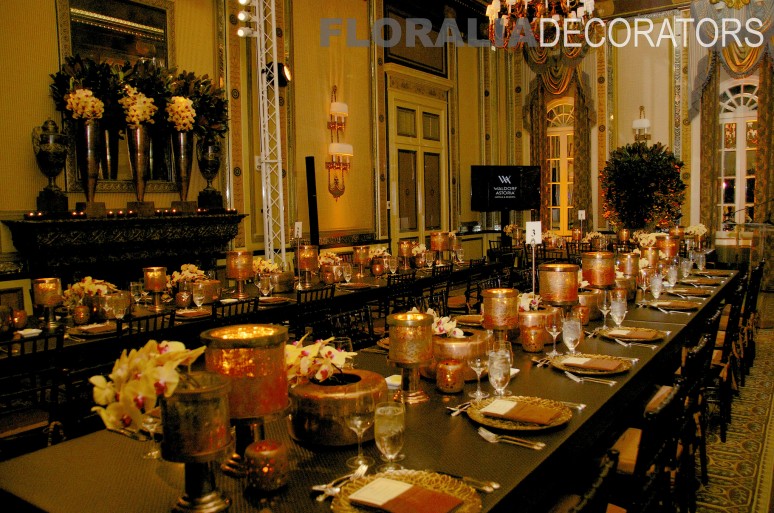 Here is our finished room.